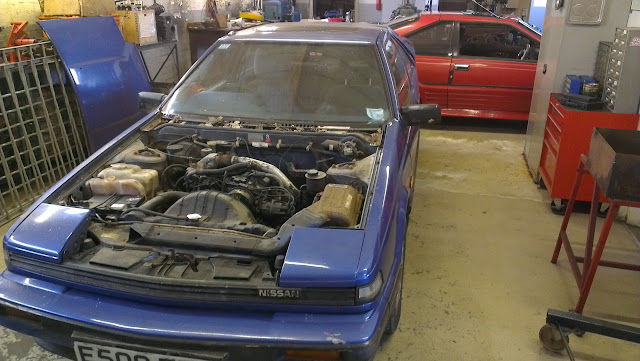 My love for the 80's Nissan Silvia (S12) Turbo began at uni. A neighbour had been knocking about in one for a while until the exhaust manifold gasket blew - a common problem. He was moving back home for the summer and let me have it for a mere £100!

Since then, I've owned a few more and am currently on my 4th and 5th.

The 4th is red, has shocking bodywork, a rot-free chassis, lots of cool modifications and is an automatic. The 5th is blue, is stolen/recovered, has a rotten chassis but the important body panels - i.e. the ones no longer available - are perfect and it's a manual!

I drove #4 around for a few months before the endless polishing and waxing to keep the faded paint from looking worse became too much...and I bought an Audi. She's now laid up on the drive, waiting for some TLC.

*may never happen, if it does it's a few years away :P