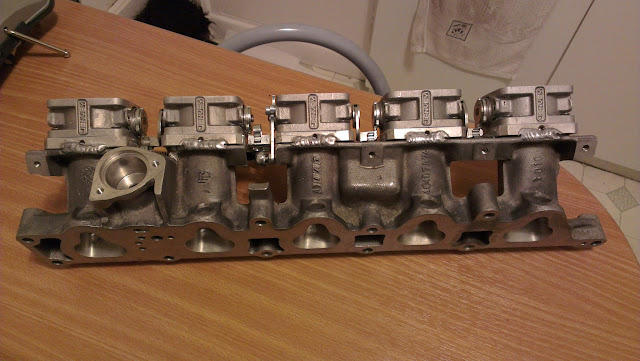 A key method of extracting power from a naturally aspirated engine is the use of multiple throttle butterflies. In the old days, this meant carburetors but generally speaking, they are inefficient, thirsty and require maintenance. Throttle bodies, on the other hand, do not suffer these issues.

For the Fiat 5-cylinder engine, neither carburetors nor direct fitment throttle bodies are available. Custom fabrication is the order of the day!

I will be using Jenvey SFS 42mm individual throttle bodies. The SFS bodies are only 33mm long (compared to the 90mm of the SF bodies), allowing longer trumpets to be used where space is an issue. Space was due to be an issue when re-fitting te engine to the Bravo but as you'll see, that plan changed too!

In order to mount the throttle bodies to the engine, a modified inlet manifold is required. Why not just fabricate one from scratch? Why modify the existing manifold? The Fiat 5-cylinder engines have hydraulically actuated timing advance on the inlet camshaft. A "variator" mechanism mounted to the front of the inlet camshaft is fed oil through the camshaft, from the cylinder head. First, however, this oil travels out of the head and into the inlet manifold, where the it meets a solenoid actuator. This actuator either allows the flow of oil back into the cylinder head and into the camshaft or diverts it back into the engine. Fabricating a manifold to allow for this would have been fiddly at best!

I started with the standard, normally aspirated manifold and had some plates welded to the end of the intake runners. This did not go to plan for a variety of reasons so I switched to the inlet manifold from the turbo variant of the engine. This manifold had nice round spigots, tapering nicely to the cylinder head port shape. Flanges were fabricated and welded to the spigots, giving a nice, solid mounting platform for the throttle bodies. The manifold was also ported to match the throttle body diameter and increased cylinder head port size. An important point to note is that in order for the throttle bodies to work together perfectly, they must all be parallel to each other. To that end, an alignment bar was fabricated and mounted to the flange plates prior to welding - another reason why the round spigots of the turbo manifold made it the better choice.

Retaining the standard manifold also allows me the option of running 10 fuel injectors and optimising their position for performance. In production engines, fuel injectors are mounted as close as possible to the cylinder head, usually for economy and emissions purposes. In high revving race engines, you want them as far away as possible. In fact, many people run the injectors outside of the trumpets, not actually mounted in to the engine at all! Having two banks of injectors, one close to the back of the valve and one far away allows you to use smaller CC injectors for improved idle, gives the fuel economy/emissions benefits at low revs and at high revs, you kick in the other bank for max performance! Oh and it looks bloody cool to boot ;)

The naturally aspirated engine's fuel rail is not really up to the job - it's plastic and the regulator cannot be removed. The turbo engine's fuel rail, however, is much better. Aluminium, removable regulator and removable take-offs. Using two of these avoids the expense of custom rails. One rail has the fuel reg removed, with an adapter in its place to take a pressure sender, the other retains the turbo engines std 3 bar regulator. Both rails have had their push-on take-offs replace with JIC fittings.