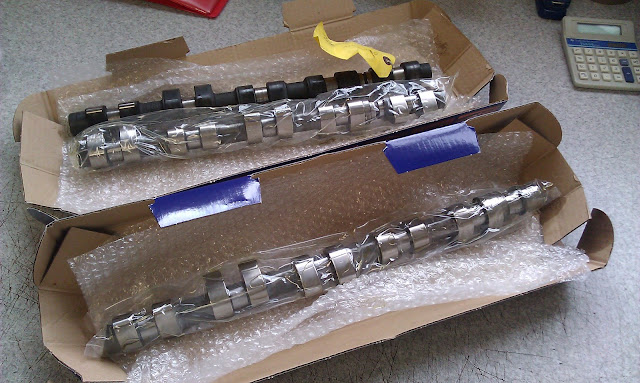 The only people who seem to have camshafts off-the-shelf for the Fiat 5-cylinder engine are Italian firm, Colombo & Bariani. Unfortunately, nothing they had was anywhere near as aggressive as I wanted and their prices were quite high so I sent the camshafts from the 2.4 head to UK based Kent Cams. From those, Kent made me a nice pair of steel billet cams with a popular profile used on C20XE and Duratec race engines. They even have scope for re-profiling at a later date should any new developments come along.

Due to the aggressive nature of the cams and the desire to rev the engine to 9000RPM, the standard hydraulic cam followers were not an option so they were converted to solid followers and clearances adjusted using top hat shims that sit on the tip of the valve stem.

Fitting the cams was not as straight forward as just chucking them in. Due to the high lift, some machining to the head was required to allow the lobes to clear without fouling. Another side effect of this high lift became evident when bolting down the cam caps; the bolts now would only engage a couple of threads before the cam began to act on the new race valve springs. This led to some threads being stripped, at which point the decision was made to fabricate some cam cap studs and bin the bolts. This brought its own issues with regard to cam cover clearance but in the end, it worked out nicely and made shimming the cams so much easier.