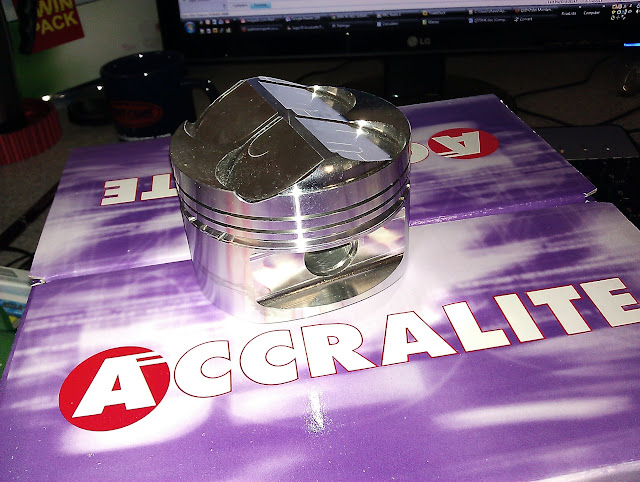 There are only two downsides to the Fiat 5-cylinder engine; one is the weight and the other is the fact that nothing is available for it off the shelf!

Thankfully, where I work we have a good relationship with Omega/Accralite, UK manufacturers of forged pistons. For a one-off project like this, they normally require a minimum of 12 pistons to be produced but as a special favour, they did me a set of 5 - just hope I never melt one!

These forged aluminium pistons were made with a large instruder, deeper valve pockets and scope to machine down said intruder should the compression ratio be too high.

For maximum compression (required for maximum power!) the cylinder block was decked to bring the pistons out of the block and squish area to the optimum distance from the cylinder head (when using the MLS head gasket from the turbo engine). After which, the compression ratio was calculated. It was a rather large 12.8:1 - any higher and I'd have to run on alcohol! I wanted this engine to last more than five minutes so the piston intruders were machined down on a lathe to give a final compression ratio of 12.5:1