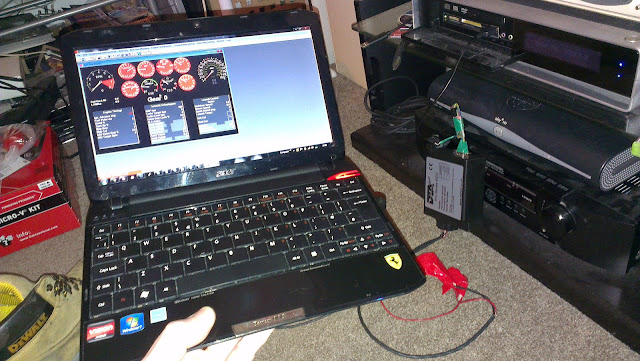 Instead of having a normal dashboard in the Coupe and owing to the fact the Bravo engine will be running a DTA S100 ECU, I decided to complicate matters further by displaying the vital engine information on a tablet.

In a modern production car equipped with OBD, this is a simple affair. DTA ECU's, however, do not have OBD. Nor do they have any kind of wireless adapter available. They do, however, have a data stream.

My first step was the hardware. I'm not going to go into much detail here as I plan to sell the adapters somewhere down the line but sufficed to say, I've constructed a small Bluetooth adapter which allows reading the data stream from the ECU wirelessly - so far tested using a laptop, the DTA SWin software and an S40 ECU (cheaper to replace if I killed it!). Unfortunately, it requires a small amount of external power so would need a wire from the loom or a battery but there's no way around that.

Next step is the Android app and selection of a tablet with excellent daylight viewing. I had considered using a Kindle as they run on Linux and an app could be written for it but the refresh rate on the screen is not particularly great - the technology isn't quite there yet. Shame really as it would be perfect.